Global sisterhood – or not?

Although we often hear things about sisterhood and how women should stick together, the reality is that both in the past and today, it has been very difficult for women across the globe to join together and resist gender oppression. Transnational feminist solidarity has been and continues to be a difficult goal to achieve in feminist movements and scholarship, for various reasons. One is that a certain type of feminism – called liberal feminism, white feminism, or Western feminism, depending on who you talk to – has often assumed that their idea of feminism is universal. This type of feminism is most recently found in Sheryl Sandberg’s (the Chief Operating Officer of Facebook) extremely successful book Lean In.

It is a feminism that has historically also been part of European imperialism, and continues to play a role in justifying imperial interventions in countries such as Afghanistan and Iraq – the assumption being that Western powers are able to ‘liberate’ women even if that liberation involves military intervention. More importantly, the liberal assumptions that underpin this approach simply cannot be used in feminist praxis in other contexts, where gender and feminism have different legacies, histories, and struggles. In the words of Audre Lorde, “the master’s tools will never dismantle the master’s house”. For women outside of privileged locations in the West where neoliberalism and imperialism continue to play a large role in producing and reproducing patriarchy, concepts that have their history in imperial centres are seen as unlikely to act as tools for meaningful change.

African American feminists were the first to argue that mainstream feminism did not – and could not – represent their experiences. They insisted that their realities were far more complex than this: they were women, but they were also black, poor/rich, urban/rural, educated/uneducated, and so on. All of these aspects of their identities combined in order to create a spectrum of realities. The emphasis on contextualizing women’s realities was a direct critique to the claim of a universal feminism. At first, the ‘triple oppression’ notion was created, which argued that Black women suffer from three different oppressions: class, race, and gender (becoming the holy triad of feminist studies). Other identities such as sexuality and disability followed later. This was to take apart the notion of a universal woman, and bring to the forefront the idea that ‘woman’ is a contested notion with vastly different experiences and subjectivities. 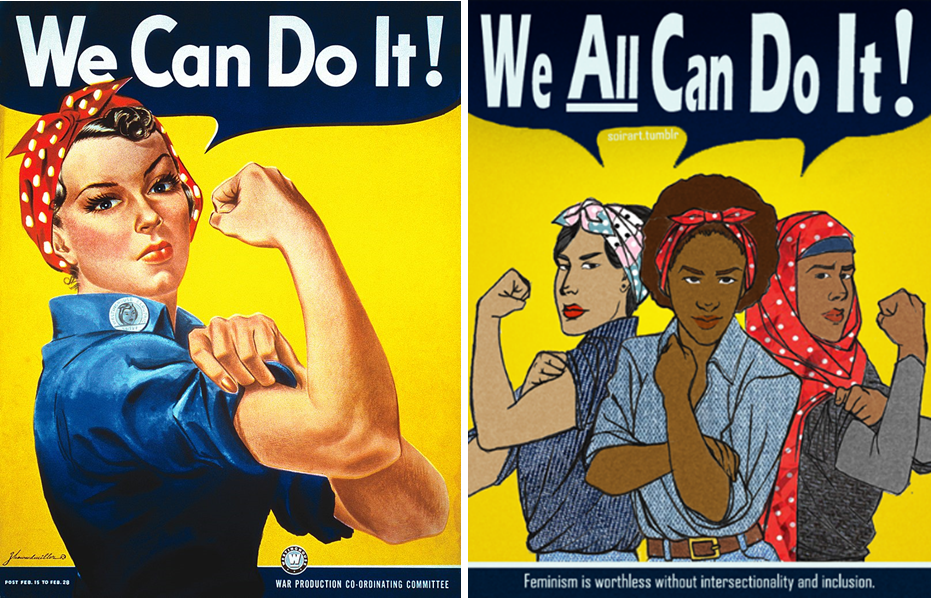 A 1942 war poster representing women working in factories and shipyards, and an intersectional riposte

Intersectionality is what occurs when a woman from a minority group tries to navigate the main crossing in the city … The main highway is ‘racism road.’ One cross street can be Colonialism, then Patriarchy Street. She has to deal not only with one form of oppression but with all forms, which link together to make a double, a triple, multiple, a many layered blanket of oppression.

The urgency of intersectionality by Kimberlé Crenshaw

A focus on these intersecting structures of oppression clearly matters to how we think about political economy. For example, in her 1989 paper ‘Demarginalizing the Intersection of Race and Sex’ Crenshaw demonstrates how an intersectional lens enables us to unpack labour market discrimination. She begins her analysis by citing a legal case in which five employees were prevented from suing General Motors for discrimination specifically as black women; the court would only accept claims of either race or sex discrimination, neither of which applied as white women and black men had been treated according to the law.

The basic premise of intersectionality: a way of complicating feminist research in order to look at different layers of identity and how they combine to produce experiences

Intersectionality became a highly debated approach within the social sciences and feminism, and spurred a number of debates about how the theory should be defined or put into practice. But what remained constant was the basic premise of intersectionality as a way of complicating feminist research in order to look at different layers of identity and how they combine to produce experiences. This process inherently included a focus on power relations and voices that are usually marginalized. It is essential to remember that intersectionality arose as a direct response to the exclusionary nature of much of liberal feminism, hence the emphasis on the function of power, and its ability to include/exclude.

Intersectionality can be a powerful tool with which women in the Global South and women of colour in the Global North can reclaim a feminist project that has often excluded and objectified them. Many of these contexts have a long history of debating and discussing gender issues in the public and private spheres. However, when colonialism brought first wave feminism to these contexts – which imposed a foreign understanding of gender and feminism onto society – it became difficult to navigate a way forward given the extreme violence of colonial rule. Colonial feminism either became the dominant form of feminism or became deeply intertwined with local variations.

This became problematic following the process of decolonization, as many saw feminism as a foreign import – which it, strictly speaking, was. In many of these contexts, women and men active in feminist organising were already thinking intersectionally. Gender was seen as connected to nation, race, religion, class, and so on, and liberation meant liberating the collective rather than just the individual. This, however, sometimes had the effect of completely marginalising gender oppression, through the side-lining of revolutionary women in the formation of postcolonial nation states for example.

Carrying out research and activism from an intersectional perspective allows us to decentre liberal feminism. This would mean no longer locating the ‘start’ of the feminist project in first wave feminism in the West, but to see women’s activism as a process that has happened across many places at different times. It would mean acknowledging the importance of other systems of oppression that have been downplayed by liberal feminists, such as race, religion, class, and imperialism. Finally, it would mean an explicit focus on power relations. In essence, using an intersectional approach is one way of reclaiming the feminist project and making it a project all women can be part of. 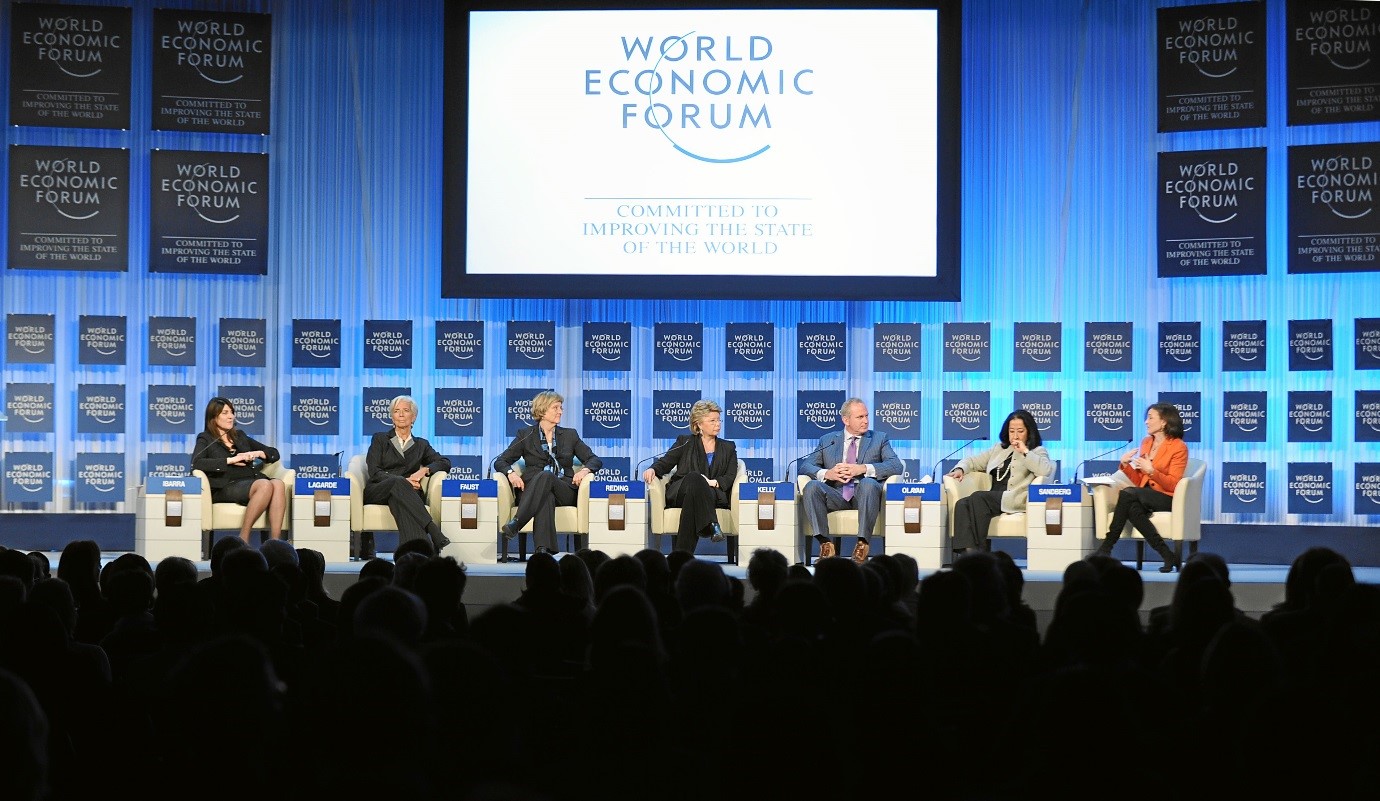 A World Economic Forum talk on getting women into positions of influence. There must be more to feminism than this.

Although intersectionality can seem daunting, there are many ways in which we can learn to think or act intersectionally. One way is to start to see feminism as a project whose goal – dismantling patriarchy – accepts that patriarchy harms both women and men. There is a need to move beyond seeing gender justice as an individualistic goal to be attained by every woman: a view that sometimes views men as ‘the enemy’ or asserts simplistic arguments such as the suggestion that the Lehman Brothers bank would not have collapsed if it has been ‘Lehman Sisters’. Rather, patriarchy can conceptualized as a system that oppresses everyone, albeit in very different ways. This is not to say that men do not benefit from patriarchy – all men do. Rather it is to complicate ideas of masculinity by showing that not all men benefit equally.

Work on masculinity and how different masculinities are produced has shown that men who fit the ideal type are in a dominant power relation not only with women, but also with men who are outside of what is considered ‘masculine’. In certain situations, a woman may have more power than a man because of differences in race or class – it is never just about gender. Seeing feminism as collective is also more applicable to societies in which individualism is not the norm. For many women in postcolonial societies, the aim is not to challenge men, but rather to challenge the system and structures that allow men to become dominant. There can be no feminism without anti-imperialism, anti-capitalism, and so on, because patriarchy does not exist in isolation from imperialism, capitalism and other structures. Feminism is about liberating society, and that includes all genders. 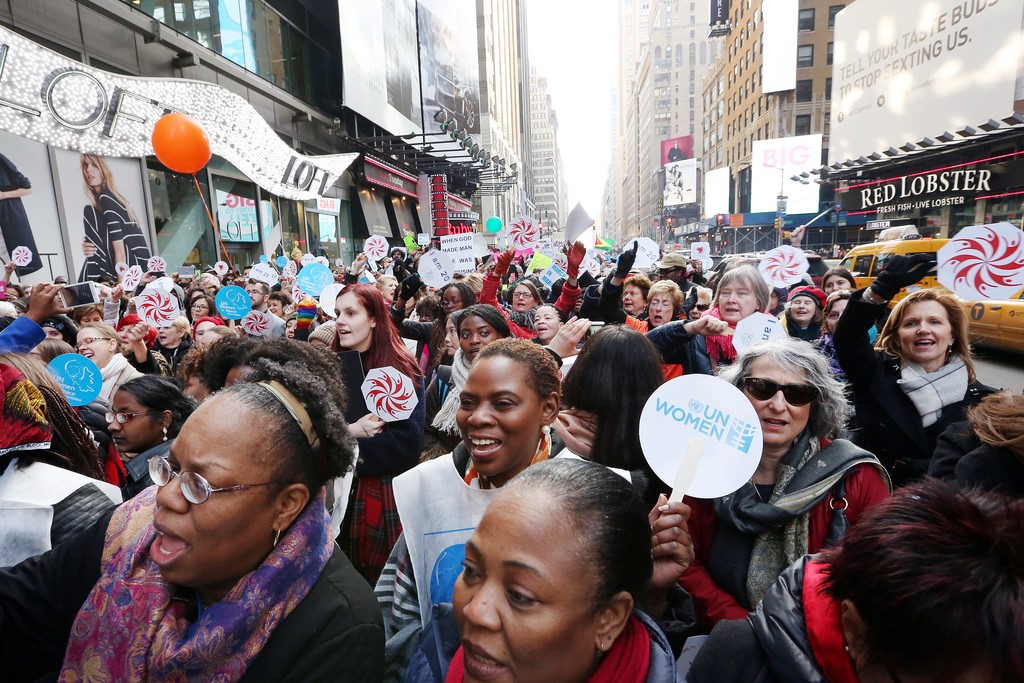 Another way to employ an intersectional approach is by deeply interrogating the categories and notions of oppression we use. Being self-reflexive is important because we are socialised to accept ideas that are not necessarily true. Rather than assume that we know what harms women, we should let the intersectional categories emerge from the cases and contexts themselves, bearing in mind global structures of inequality.

To think of an obvious example, in the case of Arab women it is almost always assumed that ‘culture’ (already a problematic homogenous designation) is somehow implicated in the oppression of women. Not only does this essentialise ‘culture’, it also isolates it as something problematic that needs to be fixed. This ignores the possibility of Arab women using cultured notions as a means of fighting oppression. It also fixates on culture at the expense of other relations or structures such as class. Constructing ‘culture’ as a barrier to women’s personal freedom reveals a liberal conception of the human subject, where liberty – at a personal, individual level – is framed as especially important and as the direct result of the elimination of cultural practices, without taking into account the political, economic and social factors that are affected by both local and global factors. 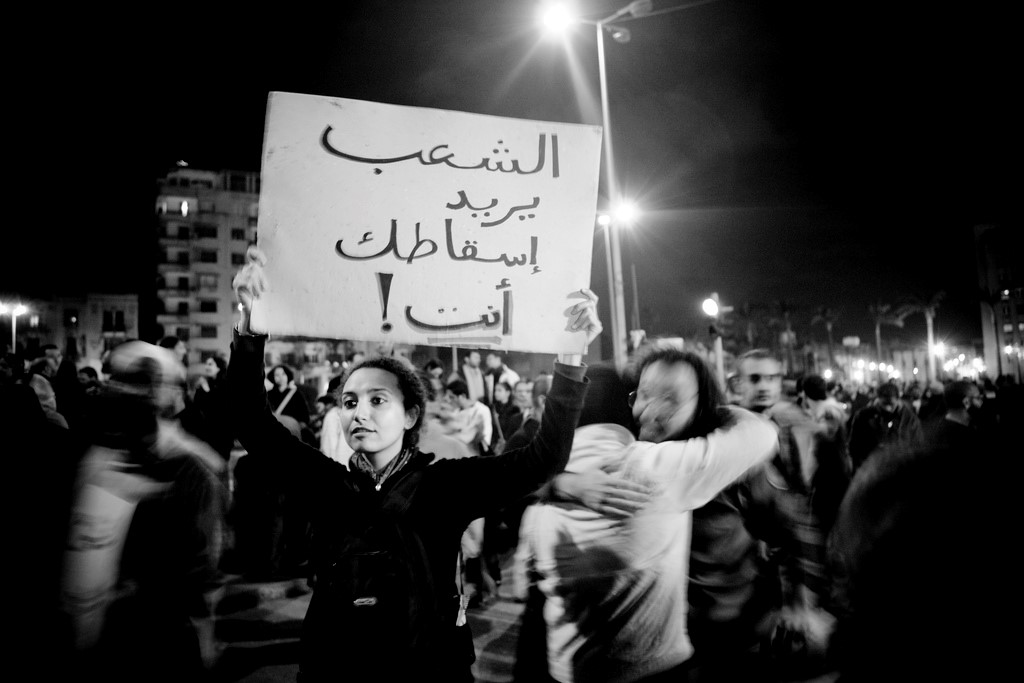 The 2010-11 revolutions in the Middle East and North Africa represent an event where politics, gender, class and nation came together in intersectional ways

Intersectionality can also be seen as one of the most important critiques of the exclusion, simplicity and objectification that have plagued feminism for far too long. In order to avoid the problems of mis-representation, it is important to be reflexive and open to views different from our own. This allows for knowledge to be built from the bottom upwards, and allows us to become conscious of power relations and hierarchies within societies. Once this awareness is created, it becomes easier to dismantle these oppressive systems and to create a real transnational solidarity. 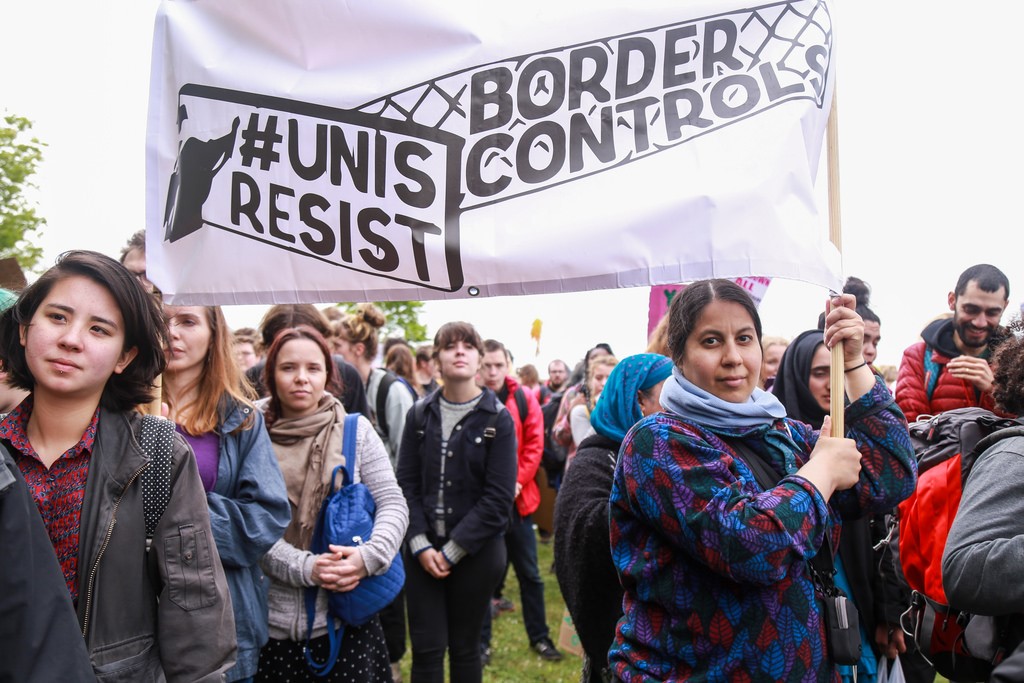 The differentiated effects of the border controls, economic marginalisation and judicial punishments experienced by migrants can be better understood through intersectional analysis

Mies, M. (2014). Patriarchy and accumulation on a world scale: Women in the international division of labour. London: Zed Books Ltd.

Rai, S. M. (2002). Gender and the political economy of development: From nationalism to globalization. Oxford: Wiley

Salem, S. (2017). On transnational feminist solidarity: the case of Angela Davis in Egypt. Signs: A Journal of Women and Culture. (Forthcoming November 2018.)