What does humanitarian practice look like now? International relations scholars use the term ‘humanitarianism’ with specific reference to the 1864 Geneva Convention and the legal recognition of humanitarian principles in practice of war.  Yet, beginning with the 1970s crisis in Biafra, humanitarianism has expanded in reach to include an assortment of nebulous interventions on behalf of an assumed shared humanity. “Humanitarianism” now signifies the effort to ‘do-good’, to express sympathy in response to distant suffering, whether this distance is actually geographical or social. Everyday humanitarian practices can now take place in many different realms: in consumption, entertainment, or across social media. These are all areas that are traditionally considered outside of the humanitarian scope, not least because of their association with market-driven and celebrity-oriented activity rather than altruism and anonymity. Such practices can change – in both conservative and critical ways – how we seek to help others, and how think of ourselves when doing so.

Today’s marketplace is inundated with products supporting humanitarian causes that promise to give aid to beneficiaries, provide ‘good feelings’ to consumers and promote the brands of corporations and humanitarian non-governmental organizations (NGOs), thereby allowing consumers to ‘buy into development’. Consumers sipping a bottle of Belvedere vodka can ‘save women and children with AIDS’’, ethical shoppers buying a pair of TOMS shoes automatically donate a pair of shoes to ‘a child in need’ and parents more concerned with African education than with high sugar intake can purchase Fruit Gushers that provide a limited number of laptops to schoolkids in Rwanda. The commodification of humanitarianism (turning people and causes into marketable things) is thus linked to the privatization of help (replacing public donors with private philanthropy). This augmentation of the marketplace for development signals the deepening engagement of new actors – corporations, celebrities, and Western consumers – in humanitarian financing, or what Stefano Ponte and I have called ‘brand aid’.

Brand aid refers to how products are sold by celebrities in support of worthy causes to Western consumers who want to engage in low-cost heroism. For example, think of the way the U2 singer Bono has promoted ‘RED’ products to support and promote African causes, including global AIDS funding. On these terms, RED is pushing the boundaries of Corporate Social Responsibility (CSR) towards disengaged action to save the lives of ‘distant others’. The corporations involved in RED have a low level of involvement with Africa in their day-to-day operations; no explicit attempt is made through RED to implement better work, social, or environmental conditions of production. Brand aid initiatives are therefore moving CSR from conscious consumption in which consumers grade products in relation to how they were produced, to compassionate consumption in which products are considered ‘good’ if they contribute to a ‘good cause’. 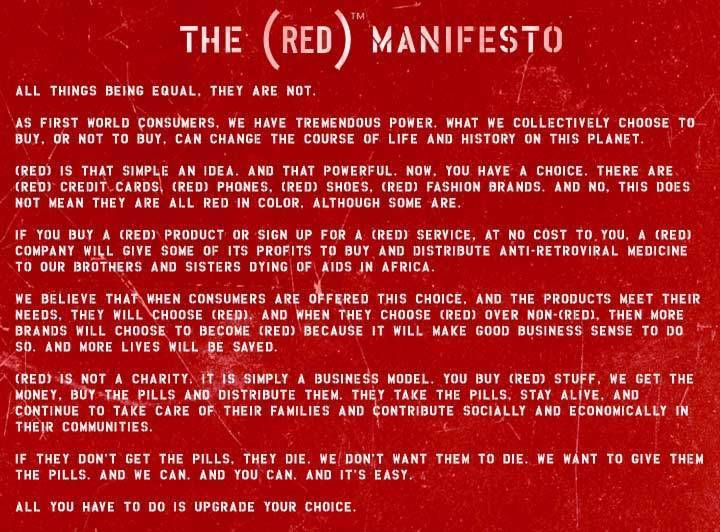 Founding statement for (RED) from Bono and Bobby Shriver

Such practices raise important questions about what the linking together of corporations and celebrities in the practice of helping actually does to humanitarian causes, to donors and recipients. Commodified compassion could become a way of strengthening relationships between consumers and producers to push toward fairer relations, but it can also become limited to financing humanitarianism through ‘cause-marketing’. There may appear to be a radical democratization of development, where everyone can become a philanthropist like Bill Gates through consumption of the ‘right’ product. But by doing so, do they also legitimate, or otherwise distract from, the relations of inequality and poverty from which they emerge?

Selling products and events to ‘help’ distant others, from brand aid to Band Aid, has linked celebrities and corporations to global humanitarian causes in unprecedented ways. Correspondingly, the development sector and the celebrity industry have increasingly formalized relationships, based on a cadre of full-time celebrity liaison officers in NGOs, and specialized talent agencies linking performers to philanthropic causes. It also leads to new celebrity-led organizations, such as Madonna’s Raising Malawi and Ben Affleck’s Eastern Congo initiative, that use fame to fashion authenticity for their development interventions, establish organizations that are considered credible development actors through endorsement and funding, and orient accountability upwards towards the celebrity fan-base in the Global North rather than downward toward the intended beneficiaries.

In these roles, celebrities are not simply individuals undertaking idiosyncratic acts of benevolence, but partaking in an institutionalized series of practices of appearing designed to produce a profit for other people beyond the celebrity themselves. Thus, celebrity, business, and humanitarian realms intertwine through global and local renditions of moral value. In this way, celebrities can serve a pedagogical function, teaching people how to feel and act, by embodying the appropriate way to document and share feelings of compassion. As Lilie Chouliaraki suggests in her book The Ironic Spectator, ‘the tearful celebrity, the rock concert, the Twitter hype and the graphic attention are prototypical performances of post-humanitarianism.’ Celebrity humanitarianism can write an affective script for citizen-subjects and market-subjects to follow, a point which has not escaped the attention of politicians and business elites who frequently ally themselves with these performances. 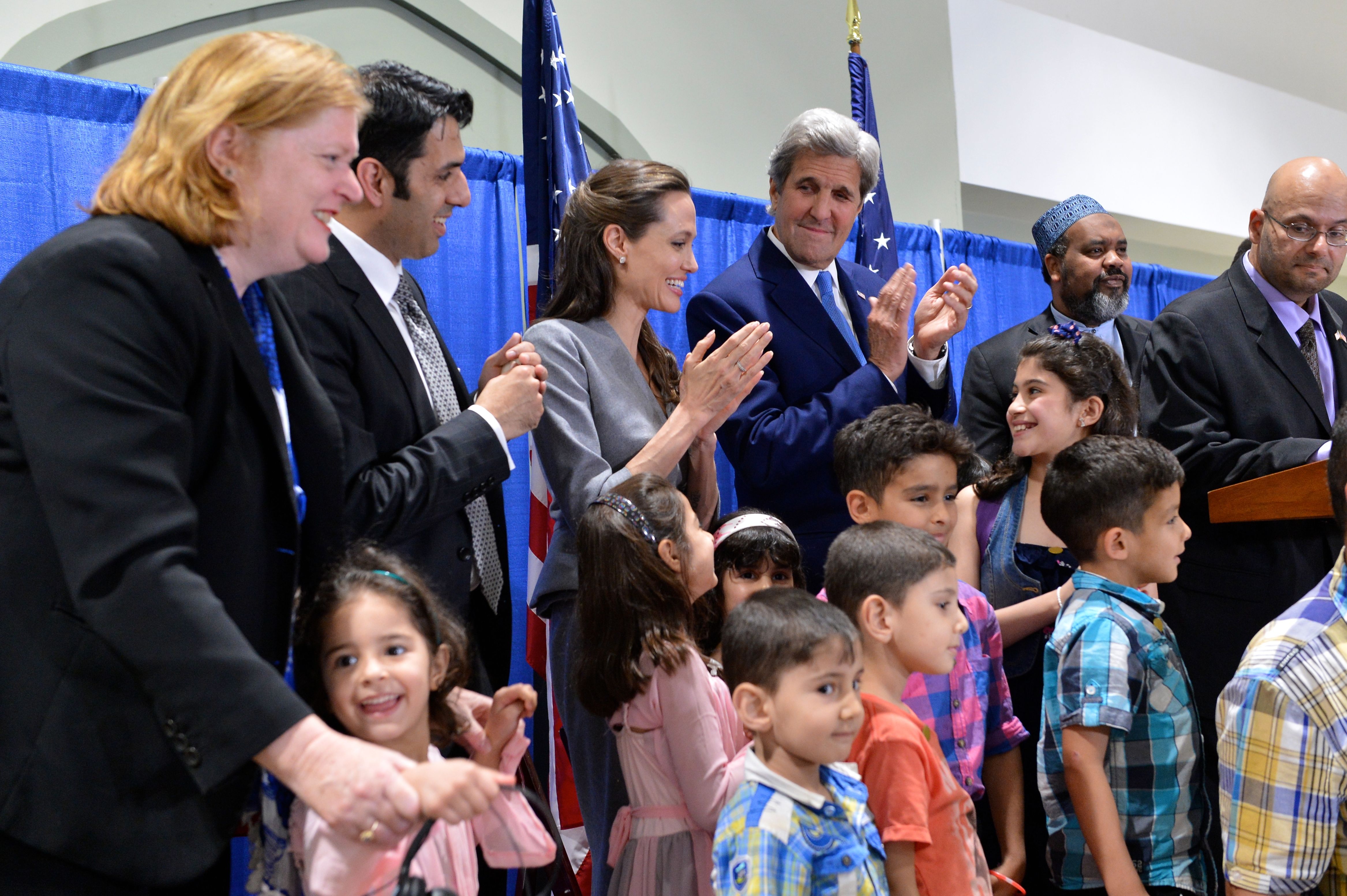 Thus, celebrity humanitarianism can work to structure the institutional forms of life that it seeks to reflect upon, in other words, as we argue in our book Celebrity Humanitarianism and North-South Relations: Politics, Place and Power, by ‘staging inequality’. While there was clearly no ideal past when humanitarianism or North-South relations were more authentically concerned with mitigating the negative effects of poverty and inequality, we should still remain critical of the legitimacy that elites gain through celebrity engagement. For instance, as celebrities (and corporations) become increasingly involved in shaping the meanings of humanitarianism, it is arguable that the field itself will be increasingly shifted toward the elite, the profitable and the photogenic. At the heart of the humanitarian impulse is the push for modernity that we see in both colonialism and development. This is a form of continuity. In order to understand the changes brought by celebrity humanitarianism, we need to examine the actual practices of elite leadership in different contexts – one example being the way that cultures can be drawn to the ironic as much as the iconic, thus destabilizing the new ‘do-gooding’ norms being established.

Everyday humanitarianism often portrays a parody of Western visions of suffering, not least in the tendency to relegate ‘Africa’ to position of a helpless recipient ‘nation’. As a consequence, there have been numerous backlashes against this kind of compassion, especially in the subversive spaces opened up by social media. Three prominent examples, discussed below, are Africa for Norway, Barbie Savior and the Humanitarians of Tinder blog.

The Norwegian Students’ and Academics’ International Assistance Fund have now produced three viral videos parodying our images of the Global South, of which the YouTube video ‘Africa for Norway’ is the most famous. This spoof of the Live Aid charity single Do They Know It’s Christmas urges Africans to send radiators to Norwegians suffering from the perils of a cold climate. While this campaign has been celebrated for using satirical inversion to denaturalise the simplistic and degrading ways development campaigns tend to represent Africa and Africans, David Jefferess questions the assumption that merely participating in these critical discourses “will make us good”. He questions the extent to which popular media parodies are equipped to examine the structural violence that undergirds humanitarian relations, including “the context and conditions for suffering in Africa, and how Europe and North America are complicit with, and may benefit from, those same causes and conditions”. These cautions in mind, we must consider the potential social inaction imbedded in critical reflection through irony.

Building on this, how should we think about the Instagram account Barbie Savior? This was established by curating a series of photoshopped images and sarcastic captions documenting the doll’s imaginary international volunteer journey. The account has garnered over 122,000 followers, with the stated aim to:

“Shine a light on the people who fetishize and over-sentimentalize the experience of visiting Africa: The people who turn smiling African school kids into living photo-ops, who talk about how “happy everybody is even though they’re so poor!” and who never seem to specify exactly what country in Africa they actually visited (because, you know, Africa is a country).”

Does such satire encourage critical thought or add an additional layer to the commodified edifice of everyday humanitarianism?

Finally, the dating app Tinder may serve as perhaps the unlikeliest of social media spaces for engaging with the performance of humanitarianism, yet it too deserves scrutiny. Cody Clarke, a writer and filmmaker, documents screenshots of photographs from the closed network of Tinder to publicly ‘out’ users of the site who post photographs showing themselves in some ‘do-gooding’ relationship that appears to take place in the South in order to increase their desirability. In an online interview with me, Clarke explained:

“I started it just as a place to post all the ones I was noticing on Tinder. I started out just posting them on my personal Facebook page for friends to see, and they were so popular that I figured I might as well do a Tumblr. I’d never used Tumblr much so I had no idea how fast things can circulate there, and only a couple days after I started it, it started taking off really fast.”

Yet in policing the postings of would-be humanitarians and separating the ‘proper’ from the ‘improper’, are these social media parodies not complicit in reproducing underlying images and myths that lead such photographs to be taken in the first place? 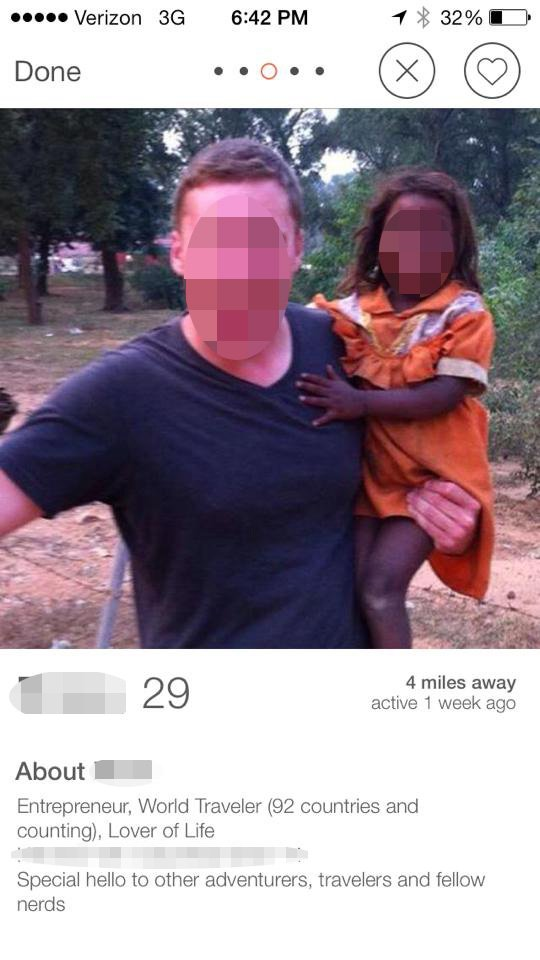 In conclusion, everyday humanitarianism in consumption, entertainment and social media might at first appear to be more democratic in expanding the possibility that anyone can help distant strangers. Yet, these gestures are shaped by and channeled into a global elite politics that does nothing to confront the challenges of resolving the fundamental tensions of humanitarianism:  the satisfaction that you can make a difference in the life of another person and the recognition that your actions do nothing to change the structural conditions that perpetuate poverty and inequality.

Chouliaraki, L. (2012) The Ironic Spectator: Solidarity in the Age of Post-Humanitarianism. Cambridge: Polity.

Richey, L. A. and Ponte, S. (2011) Brand Aid: Shopping Well to Save the World. Minnesota: University of Minnesota Press.

Richey, L. A. (2016) ‘“Tinder Humanitarians”: The Moral Panic Around Representations of Old Relationships in New Media’, Javnost – The Public: Journal of the European Institute for Communication and Culture, 23: 4, pp. 398-414.

Brand aid – a blog by the authors of the book