Laughter is a common human reaction. We laugh because something is funny, or perhaps embarrassing or awkward, sometimes we laugh at tragedy, and on occasion we find ourselves laughing out of sheer happiness though nothing necessarily humorous occurred. In the face of ‘serious’ politics (diplomacy, wars, violence and security) laughter offers respite and breathing room. Yet laughter is far from uncontroversial. In its ability to poke holes at a seemingly spotless façade laughter acts as resistance towards dominant elites and power-relations in the global political economy.

Recently we have seen a surge in political leaders speaking out at being made fun of. Donald Trump, Xi Jinping and Recep Tayyip Erdoğan have all taken action, albeit in different ways, at those who have made them the butt of the joke. Erdoğan took satirist Jan Boehmermann to German court based on a poem he recited in 2016 making fun of the Turkish President. The incident led to a debate about freedom of speech in Germany where Hamburg courts barred the replication of parts of the poem. In 2017 Trump, in an interview with TIME called late-night TV-host, Stephen Colbert, a “no talent guy” after he made a joke about the relationship between the US and Russian Presidents. And in 2018 China banned an upcoming movie about Winnie the Pooh, after the children’s cartoon had been used to mock Xi Jinping online.

Laughter’s ability to upset those in power is especially evident in countries where freedom of expression is limited. The ‘unserious’ nature of humour has in these cases meant that people can speak out in ways that otherwise would not be possible. Indeed, in its ambivalence, comedy can be about who or what we need it to. A joke about the president could just as easily be about your aunt or uncle, and we can imitate people without having to say their names. An example of how humour has been used in an oppressive environment is the 2015 ‘Mugabe-falls’ memes. Built upon an image of Zimbabwe’s President Robert Mugabe falling that the state attempted to suppress,  these memes were not only distributed further than the picture would have otherwise probably reached, but through their humour they were also able to comment on local politics – for example depicting Mugabe running away from police violence. 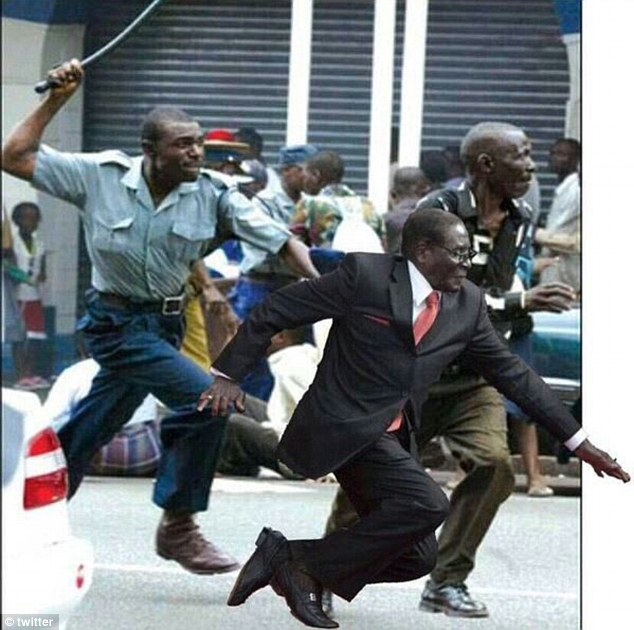 Laughter and comedy have also been used to challenge liberal conceptions of development and progress. In an era of celebrity humanitarianism and commodification of fundraising, laughter and humour allows people to examine common portrayals and conceptions of the global north and south. A comedic video launched by the Norwegian Students and Academic Assistant Fund in 2019, for example, raises concerns about the commercialisation of development – where corporations and companies link with and sponsor certain products equating purchasing of particular brand with doing good and supporting those in need. The video, which in some ways also entrenches ideas about a homogenous Africa, depicts how the board of a company in the African continent, Africa Corp., discusses potential support for a charity that delivers radiators to freezing Norwegians. At one point, one of the characters, highlighting the arbitrary conceptualisations of development charity, points out that “it’s becoming more about us, than about the Norwegians”.

A comedian that has used humour in different ways to address global development is Trevor Noah. Noah gained international recognition as a correspondent on the popular American satirical news-show, The Daily Show, and soon thereafter, in 2015, took over as the host. Noah, whom according to his own website is “the most successful comedian in Africa”, has used his position to not only criticise and scrutinise political elites, but also comment upon, and compare political development in the global north and south (he has for example compared US President Donald Trump to African presidents) addressing topics such as race, disease and poverty.

Focusing on Noah’s stand-up comedy, a re-occurring theme is that of race. A South African comedian, he grew up as a mixed-raced man in a time where government legislation and policies were based on racial segregation. The son of a black Xhosa woman and a white Swiss man, he often jokes that he was born a crime explaining how his mum was not allowed to hold his hand when they were walking in public; he jokingly states that he felt like “a bag of weed”. Noah often comments upon and jokes about the implications of how race is constructed in society. In a routine from his one man show African American (2013) Noah highlights the implications of race for peoples’ economic possibilities. He tells the story of how he wanted to open up an account with Bank of America, and informs his audience that the process involved providing his racial identity. Black and Hispanic customers were charged higher interest rates, so Noah jokingly concludes that “white is right”, illustrating how constructions of race are integrated into the capitalist market space.

In another routine, from Live at the Apollo, Noah disrupts this notion that ‘white is right’ joking about his desire to be black having never felt like he truly fit in to any racial identity:

In this joke Noah appears to put on display the ways in which race is, arbitrarily, constructed. He explains how he is not black in South Africa, and contrasts this with the idea that he would be in America. He highlights how race is related to more than our skin colour, by discussing how he had to practice speaking in ‘black American.’ In the crescendo of the joke, he lets us know that none of this is enough for him to be labelled black. Instead he is mistaken for Mexican. In every step Noah puts on display ideas about race in a way that is almost what we expect, but not quite. Through these joke Noah highlights the cracks and fissures in the way we divide the world based on race and the implications this have for the global economy, arbitrarily privileging some people over others.

In another joke, from his 2012 set entitled That’s Racist, Noah comments on stereotypes of Africa, highlighting the arbitrary nature of constructions of the global south in relation to disease. In the joke Noah invokes stereotypes about Africa, while simultaneously enforcing ideas about the ‘dumb’ American. The context for this specific joke relies upon the former South African President, Jacob Zuma. Through a process of translation and paraphrasing, Zuma is popularly (mis)attributed the statement that showering after sex can kill the HIV virus (from minute 2):

In the joke Noah interacts with an “American surfer-girl” that refers to him as Africa, and which he refers to as America. Joking about the questions she asks him, and putting on a particular accent and set of mannerisms, he enforces ideas about both Americans and women as dumb. At the same time as he also questions common stereotypes about Africa– for example, that all people from the African continent have AIDS, and that there is no technology. He unsettles the latter by performing what the stereotype expects but in a sarcastic manner, stating that he “used [his] monkey grip under the plane” in order to travel from South Africa to the US. Noah thus imitates stereotypes about the underdeveloped ‘African’ in a way that is almost what we expect, but not completely so. This allows Noah to both enforce and resist stereotypes, by playing them out onstage in a way that displays their inadequacies.

In the final part of this joke Noah manages to both resist stereotypes about AIDS and critique Jacob Zuma. Noah builds up to the punchline by letting the ‘surfer-girl’ play out the stereotype that Americans are dumb, whilst also playing into stereotypes about Africans and AIDS.  He lets the ‘surfer-girl’ ask him ‘stupid’ questions about whether he has had AIDS, telling the audience that he has decided to go with her assumptions. Here Noah plays out the misconception that all Africans have AIDS, allowing him to later unsettle liberal stereotypes about progress and development by displacing notions about the smart, benevolently helping global north, and the underdeveloped, unknowledgeable global south. He unsettles these perceptions when he lets ‘Africa’ tell ‘America’ how to get rid of AIDS. Noah does not completely reverse these stereotypes, instead he inhabits them in an unexpected way that disrupts perceptions about global development.

In the final build-up to the punchline Noah tells the surfer-girl and his audience that AIDS is like chocolate, and so you shower to get rid of it. He then lets the audience laughter become the resistance of the joke as he ‘tricks’ them into laughing at Zuma’s supposed statement that you can avoid AIDS by showering after sex. In Noah’s stand-up comedy we can thus see several ways in which laughter can operate as resistance; it critiques elites and displays what is problematic about the stereotypes we sometimes hold to be true. This shows us how comedy can therefore challenge global political economy, by disrupting the power structures upon which it is built.

Laughter might seem like an uncomplicated and ordinary human expression. Common to our day-to-day lives, it appears to be a mere expression of our feelings. However, if we investigate it further we can see how laughter and comedy can be used (not necessarily deliberately), to oppose both those in power, and global power relations. Laughter, more than an everyday act, is also a way in which people resist the conceptions upon which the market place is built.

Musila, G. A. (2014) Laughing at the rainbow’s cracks? Blackness, whiteness and the ambivalences of South African stand-up comedy, in Civic Agency in Africa: Arts of Resistance in the 21st Century, edited by Ebenezer Obadare and Wendy Willems, 147-166.  Woodbridge: James Currey.