Occupy is only the most recent in a long line of popular resistance movements that have caught the political imagination. But what is resistance? How and why do people resist power? And what is the appropriate form of resistance?

A standard definition of resistance relates to ‘everything that we are against’: so we might think about forms of governance that perpetuate inequality or exclusion. Indeed, critical theories of IPE have often sought to complement discussions of governance with a healthy dose of critique and the suggestion of alternatives. Resistance on these terms is often imbued with a sense of improvement, or resolution. We therefore resist in order to establish a better set of social relations for ‘the working classes’, ‘women’, ‘indigenous peoples’, the variously marginalised. As such many approaches to IPE carry an implicit normative agenda and celebrate particular agents of reform like the ‘unions’, ‘global civil society’, ‘organic intellectuals’, or ‘Bono’.

However, it is also possible to think about resistance as a more pervasive social form that is not necessarily tied to a normatively desirable agenda. Think of punk, graffiti, or vandalism. Note that the ‘ism’ is often attached to denote the rational demarcation of a phenomenon. But sometimes resistance happens so quickly it is hard to know how to understand it. Indeed, the Occupy movement seemed to confuse many established political actors and commentators because it did not have an obvious leader, a clear message, or indeed, much of a plan. Indeed, many would argue that that was precisely the point: to bypass traditional political channels because they are increasingly a part of the problem. On this view, resistance may not be the answer to problems identified by IPE theorists, but precisely the question that they should be looking at first.

One powerful view of resistance that has held great sway over IPE and the wider political imagination suggests that if a situation is unjust, then we need to change it. This conception of resistance draws inspiration from civil rights campaigns for gender and racial equality. ‘We shall overcome’ is a mantra that has inspired numerous – sometimes apparently weak – movements to build agendas for change. Why then does Occupy step back from this fairly straightforward maxim? Michel Foucault argued that resistance needs to be understood within wider relations of power. As shown in his quote below, the logic of opposition merely entrenched the possibility of subjugation and opposition, or as Anarchists have long argued, by opposing the state we reify the state as the political centre.

…there is no single locus of great Refusal, no soul of revolt, source of all rebellions, or pure law of the revolutionary. Instead there is a plurality of resistances, each of them a special case […] by definition they can only exist in the strategic field of power relations. But this does not mean that they are only a reaction or a rebound, forming with respect to the basic domination an underside that is in the end always passive, doomed to perpetual defeat. Resistances do not derive from a few heterogenous principles; but neither are they a lure or a promise that is of necessity betrayed. They are the odd term in relations of power; they are inscribed in the latter as an irreducible opposite.Foucault, The History of Sexuality

This view can be taken as both critical and imaginative. In critical terms it urges caution on how we invest in projects of resistance: they are not a spiritual project geared towards salvation on earth. For instance, in this colourful video Slavoj Zizek describes how Fair Trade can play an important role in the legitimation of global capitalism. In imaginative terms, we might start to think about creative practices of resistance.

One day you will be called upon to break a big law in the name of justice and rationality. Everything will depend on it. You have to be ready. How are you going to prepare for that day when it really matters? You have to stay ‘in shape’ so that when the big day comes you will be ready. What you need is ‘anarchist calisthenics’. Every day or so break some trivial law that makes no sense, even if it’s only jaywalking. Use your own head to judge whether a law is just or reasonable. That way, you’ll keep trim; and when the big day comes, you’ll be ready. James C. Scott, Two Cheers for Anarchism

Perhaps the members of Space Hijackers had practiced their calisthenics – light exercises – as Scott advised. For one day this anarchist group went and bought a tank. They bought the tank so they could sell it at an arms fair in London (NB: this sounds silly because they were trying to look silly, because they think the global arms industry is silly). The Police did not like the idea of a group of anarchists in a tank, apparently, so they said no and stood outside their house. So the space hijackers bought a second tank in an urban arms race of increasingly satirical proportions. The police chased one tank one way while anarchist tank number two made it to the arms fair. Sadly they were not allowed in because they were not a registered company. In another action they decided to buy some shares in an arms company. They went to a share-holders meeting, indeed, quite a few of them, nearly half the room in fact. They took advantage of the free booze that arms companies seem to be able to afford. And they asked questions about war, and bombs, and business. They created a new form of shareholder democracy. 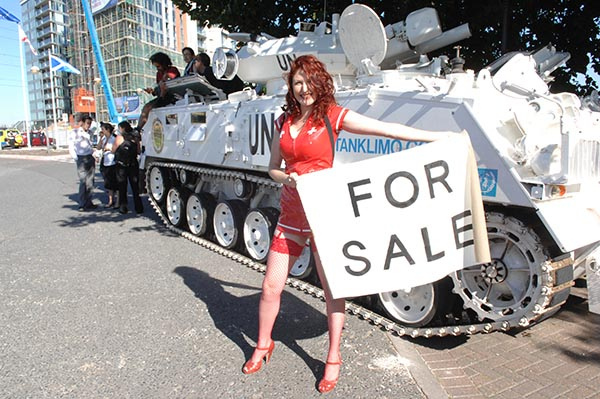 Graeber, D. (2013) The Democracy Project: A History, A Crisis, A Movement. New York: Spiegel and Grau.