The mobile phone is one of the iconic products of the global economy. It is also one of the most lucrative. In 2015 the US company Apple reported the biggest quarterly net profit in history, a staggering $18bn. According to news reports “record sales of iPhones were behind the surge in profits”. But this does not go far enough. To properly understand profit we need to look at where value comes from and how it is distributed. In the case of the iPhone, we begin with the fact that less than 2% of its final sale price has gone to the huge Chinese workforce which assembles the product. In 2010 Foxconn, one of Apple’s principal Asian suppliers, employed around 500,000 workers in its factories in Shenzhen and Chengdu.  It rose to infamy the following year with reports of 14 suicides by workers, linked to its military-style labour regime.

At the start of the day in the Foxconn factory managers ask workers ‘how are you?’ and staff must reply ‘Good! Very good! Very, very good!’

After that they must work in silence, monitored by managers and with strict limits on toilet breaks.  Pay is very low, and overtime is often the only way that workers can earn enough to live on. This also helps explain how 58% of the iPhone price can be translated into profit.

Yet Apple is not unique. Since the 1980s increasing numbers of corporations have trans-nationalised by operating across borders. Typically headquartered in the Global North, especially the US, transnational corporations preside over systems of production and exchange based upon increasingly intense intra-supplier competition in the Global South. In this way labour costs are reduced in at least three ways: 1) through outsourcing production from relatively expensive labour in the North to relatively cheaper labour in the South; 2) by exerting cost-down pressures throughout the supply-chain such that supplier firms are pushed to undercut each other in order to receive or keep their contracts; and 3) by using these pressures to intimidate Northern workers to accept pay cuts, or lose their jobs off-shore. Supplier firms respond to these overbearing pressures rationally, by slashing wage costs. This has been registered in the US in stagnant real wages but also cheaper imports of products like computers, clothing, and toys, suggestive in this country of an economic trade-off between the interests of workers and those of consumers.

A common way of conceptualising the trans-national dimension of corporate activity has been the Global Value Chain (GVC). It is enlightening insofar as it illustrates with empirical clarity the fallacy of the ‘free market’ by showing how relations between firms are coordinated through supply-chains and how states play a role in enabling this. Apple maintains its market dominance in part through high investments in product innovation and the use of state-backed patents and litigation to protect these innovations. It also breaks down methodological conceptions that development happens only at a national level by pushing us to rethink its global dimensions. But despite these insights, GVC analysis suffers from a firm-centrism which focuses on exchange much more than production, and in so doing, disconnects from the social relations (especially class relations) underlying capitalism and the fundamental inequalities opening up within it. 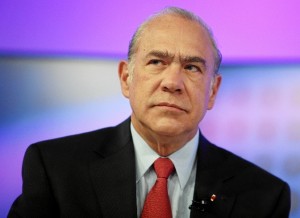 Contemporary global capitalism is characterised by extreme wealth concentration and a rapidly expanding and largely impoverished global labour force. The International Labour Organisation (ILO) estimated that in 2015 almost 1.3 billion employed people were living off less than $5 per day with one in five of these jobs thought to be linked to GVCs. While many of these people will be above the ‘official’ global poverty line of $1.90 per day, such wages remain insufficient for a decent standard of living. And yet mainstream institutions like the ILO, the World Bank and the OECD encourage integration into global value chains as a development strategy. In reality, employment within these chains generates new forms of worker poverty and contributes to global wealth concentration. They should be labelled global poverty chains.

Transnational corporations occupy the pinnacle of the global wealth-poverty hierarchy. These so-called ‘lead firms’ capture the lion’s share of value generated within global poverty chains because workers in these chains are ruthlessly exploited. Nor are they just passive beneficiaries of this process. In collaboration with international institutions, states, and national capital, these corporations have sought to create an internationally fragmented labouring class in order to raise the rate of labour exploitation. One strategy through this which this has been achieved in China’s export zones has been the state’s household registration system. This has established a temporary migrant labour pool of rural workers who are classified as non-residential workers in urban areas and who thus experience lower pay and legally inferior rights and conditions to their urban counterparts. Another strategy has been Apple’s reinforcement of norms about long working hours, setting a maximum working week of 60 hours in its contracts with suppliers. ILO Conventions stipulate that 48 hours per week should be standard.

A more equitable share of the value generated in GVCs could contribute to the amelioration of workers’ conditions and a reduction in the number of the world’s working poor. How might this happen? Leading thinkers within the GVC approach have proposed the concept of social upgrading to focus on the process of improvement in the rights and entitlements of workers. A strength of this concept is that it challenges the assumption that economic upgrading, which refers to the ability of firms to capture more value within the chain, automatically benefits workers. A weakness is that assumes that in the right circumstances exploitation can be eradicated. Under certain international trade rules or corporate social responsibility schemes it may be possible for limited progress to be made, e.g. by refusing to allow child labour or improving health and safety standards. However, this top-down approach, which looks to elites to deliver change, does not recognise the fact that capitalism depends on the exploitation of labour. Thus, even where incremental improvements are made, there will always be bigger restrictions upon what labour receives as a share of the collective wealth generated.

What we need instead is a bottom-up conception of progress which prioritizes workers’ struggles to ameliorate their conditions through collective action. Such an approach, which I call labour-centred development, should be rooted in an analysis of the expropriation of surplus labour from the worker by the capitalist in the production process. This Marxist perspective implies that changes to workers’ pay and conditions are determined not by the kindness of employers or the productivity of employees, but by the balance of power between labour and capital and how this balance is institutionalised by states.

The exploitative nature of capitalist production generates repeated conflicts between workers and managers/owners of capital, and in these conflicts workers possess two distinct sources of bargaining power. ‘Structural power’ accrues to workers from their ability to disrupt the production process through suspension of work. ‘Associational power’ is generated through workers organisations, such as trade unions and political parties, that can, if sufficiently well organised, use this structural power to force employers to better reward the burden of work. Paradoxically, these powers have to some extent been enhanced by the global reorganisation of production. This has created ‘choke points’ in supply-chains now dependent on tightly-orchestrated logistics and aided association by concentrating large groups of workers together on assembly lines. The struggles of workers have also been supported by pro-labour activism by NGOs, anti-sweatshop campaigns and other organisations which have challenged the power of capital to dictate how people live.

In China, where freedom of association has been heavily restricted, ongoing waves of (illegal) strikes and mass protests have won important concessions. In 2008 the Chinese national government relaxed law limiting unionisation and collective bargaining in trans-national corporations operating in the country. Meanwhile, NGOs such as China Labor Watch and Students and Scholars against Corporate Misbehaviour publicised allegations of abuse of Foxconn employees which led Apple to have the company independently audited. Because of these pressures, Foxconn improved pay and conditions, and held its first-ever democratic labour union election. It is time to reconsider our often elite-based comprehension of development and to enquire into how the poor can transform their own livelihoods, through the struggle against exploitation, for the better.

Blanding, M and White, H. (2015). How China is screwing over its poisoned factory workers.Wired Magazine.