In the stunning opening scene of Denis Villanueve’s Blade Runner 2049, LAPD Officer K flies over the apocalyptic landscape of near-future California on his way to eliminate a rogue android. The camera pans over a barren expanse populated by Concentrated Solar Power (CSP) plants – concentric rings of mirrors that reflect sunlight onto a central tower, heating a liquid that in turn generates electricity. This actually existing technology was presumably chosen for the film because of its futuristic appearance and immense scale, with each plant resembling a colossal metallic crop circle.

This science fiction film contains a kernel of truth: our future societies will almost certainly rely to a great extent on solar power. To avoid catastrophic global warming, we must urgently replace fossil fuels with renewable energy across a range of economic sectors. Solar is widely seen to be crucial to the success of this energy transition, with the International Energy Agency expecting solar power capacity to grow 20-fold over the next 30 years.

Yet jaw-dropping solar technologies like CSP are not expected to play a big role in this decarbonised future. Instead, an older and more mundane solar technology has come to dominate renewable energy markets: crystalline silicon photovoltaics (c-Si). First developed in 1954, these are the typical solar panels found in solar farms and on the roofs of houses, converting sunlight into electricity. This technology has beaten out more modern designs to capture the lion’s share of the solar photovoltaic market – a market that in turn dwarfs CSP and other renewable power.

The story of the surprising rise of c-Si solar panels in recent years is an important one. It provides key insights into global capitalism’s evolution and contains sobering lessons about the International Political Economy of the energy transition.

Building c-Si solar panels is a long process. Mined quartz is reduced in a chemical procedure to create an ingot of pure silicon, which is sliced into silicon wafers and treated with various materials. These wafers – now semiconductor cells – are assembled into a single solar module, or panel. Panels are then integrated into a system of mounts, wires, batteries, and meters, which regulate the conversion of sunlight into electricity on solar farms.

Unlike oil fields or coal mines, solar farms are generally located near energy users, because the costs of transmitting electricity over long distances are high. However, a solar farm’s components are relatively cheap to ship, and so component manufacturing is geographically mobile. Until recent decades, this production process was dominated by the US, Germany, and Japan. By investing in solar Research and Development, and providing generous subsidies, these nations jostled with one another to lead the world in solar panel production.

In the 2000s, companies in these advanced economies decided to innovate beyond the outdated c-Si solar panel design, investing in the production of cutting-edge thin film photovoltaics. Thin films are fine layers of semiconductor material that are deposited on a standard surface like glass or metal – supposedly allowing for the mass manufacturing of solar panels at lower costs. Thin films were therefore expected to rapidly displace the more pedestrian c-Si panels. Yet just as US, German, and Japanese firms were pivoting away from c-Si, the solar market experienced a radical transformation.

From the mid-2000s, solar panel factories began to relocate to low-wage Asian economies, particularly China. Scholars have used various terms to explain this geographical redistribution of manufacturing – from the creation of Global Value Chains whereby particular components of a single product are produced in different countries to the rise of a New International Division of Labour that has seen industry relocate to so-called Emerging Markets.

This process accelerated after 2005. Chinese manufacturers captured a growing share of an expanding global market, as rich countries’ drive to decarbonise their energy systems increased the demand for solar panels. Rather than experimenting with the latest thin film innovations, Chinese producers focussed on manufacturing the standard c-Si panel as cheaply as possible. To this end, firms took advantage of China’s poorly paid and politically repressed workforce, as well as building massive factories and achieving economies of scale. Once the success of Chinese c-Si producers became apparent, China’s government started to direct subsidies towards the industry. Further, Chinese producers began to introduce new labour-saving machines to outcompete rivals. C-Si production is now considered a highly automated affair. 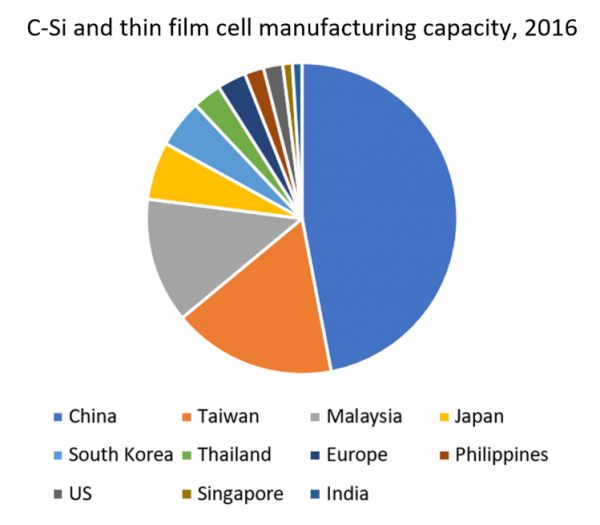 US, German, and Japanese solar manufacturers simply could not compete. By 2012, Chinese solar modules were 20% cheaper than US versions. A wave of bankruptcies struck the industry, eliminating less cost-efficient producers of c-Si panels. In addition, many firms that had gambled on new solar technologies faced disaster, as modern thin films were undercut by older but cheaper c-Si panels. Famously, the US firm Solyndra – which had received a $535 million government loan guarantee in 2009 – collapsed in 2011 after its thin film business succumbed to Chinese competition.

While individual manufacturers suffered, China’s entry into this market raised hopes that a green energy transition was within our grasp. As cheap Chinese c-Si panels flooded the market, the price of solar-generated electricity declined – falling by 82% from 2010-19 and undercutting even the cheapest coal-fired power plants. Overall, this phenomenon was heralded by many commentators as nothing short of a miracle. At last renewable energy was more affordable than fossil fuels. Perhaps the climate catastrophe could be avoided after all.

To understand this solar energy revolution, it is tempting to turn to 20th century economist Joseph Schumpeter, whose concept of creative destruction describes how new industrial innovations lay waste to existing businesses while providing benefits to society as a whole. Yet Schumpeter expected these innovations to come from monopolistic firms – massive corporations with big research departments. In fact, there are no superstar monopolies in the c-Si industry. The price transformation was propelled by legions of young Chinese firms. Furthermore, in the case of solar, it was the boring, established technology (c-Si) that drove out the exciting innovations (thin films).

Perhaps Classical Political Economy offers a better lens. For Adam Smith, it is not monopoly but competition that grows the wealth of nations. To compete, firms are pressed to improve their production processes – creating an increasingly efficient division of labour that allows them to produce more commodities at lower costs. This rising labour productivity creates an abundance of goods that sell at ever-lower prices. David Ricardo internationalised this perspective, arguing that the best outcomes for all will be achieved if individual nations specialise in producing those commodities that they have a comparative advantage in.

The ‘solar miracle’ appears to confirm such theories. An injection of competition into the sector from fledgling Chinese firms – which enjoy the unique advantages of China’s low wages and government support – drove all producers to innovate to manufacture c-Si panels as cheaply as possible. Directed by the invisible hand of market competition, private firms sought to maximise their own profits and inadvertently made possible cheap renewable electricity for all. This liberal story underpins the green growth claims made by businesses, states, and international organisations about the power of markets and competition to tackle climate change. 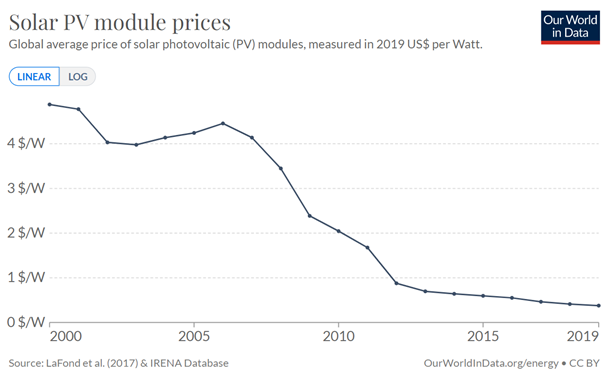 This narrative, however, paints too rosy a picture of the trajectory of solar power. As Karl Marx observed, Classical Political Economy only captures part of how capitalism works. Market competition indeed raises productivity and cheapens commodities, yet this leads not to ‘universal opulence’, as Smith supposed, but to an increasingly dysfunctional society.

For Marx, the chief weapon in the battle of competition is automation. Firms replace workers with machines in order to produce more goods with less labour, lower their costs, and undercut competitors. As automation advances, the economy tends to stagnate. Why? Because rising labour productivity floods markets with goods, outpacing consumer demand and driving down the prices of commodities. This places downward pressure on the rate of profit, which discourages new investment and impedes economic growth. To resist falling profitability, firms intensify their competitive struggle – further expelling workers through automation and attacking remaining workers’ pay and conditions. Despite its technological wonders, in fact because of them, capitalism becomes an increasingly exploitative system.

As the next section will detail, it is Marx’s dour predictions that offer the most piercing insights into the future of the solar industry and the dilemmas facing the energy transition.

‘Good for the planet – but hardly a gold mine’. This is how The Economist describes today’s solar industry. The spectacular fall in prices of c-Si solar panels, it turns out, was double sided. While it became cheaper to build solar plants and generate renewable electricity, it also became harder to turn a profit manufacturing these panels. As mentioned before, an important reason for the decline in panel prices was the automation of the industry – which Chinese firms excelled at.

From articulated robot arms to laser scribing machines, producing solar panels became an increasingly capital-intensive business as firms sought to outcompete one another. Big machine investments are worth it if they are balanced out by big profits. But the rising labour productivity generated by these machines flooded the world market with solar panels, driving down their price, pushing out more innovative models, and reducing the industry’s profitability. This is precisely the self-undermining dynamic that Marx theorised: capitalism’s very success is its undoing.

The first to suffer were European and American firms that couldn’t lower their costs fast enough to keep pace with falling profits. Yet even more successful Chinese producers began to feel the pinch. Many such firms only survived because of life support from China’s government.

Solar farms have suffered a similar fate. Competition has led operators to innovate to cut costs – for instance, by increasing the scale of farms and investing in robots that clean solar panels. This has raised electricity output, driving down prices and profitability. This problem is exacerbated by a unique element of solar power: the sun only shines during the day. This means that all farms are generating electricity during the same hours, overwhelming demand and eroding earnings. 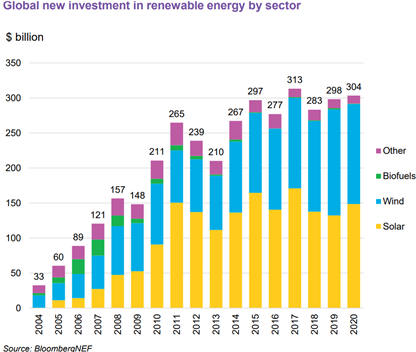 Faced with vanishing profits, global new investment in solar power has stagnated since 2011. This is disastrous for mainstream responses to climate change, which envision the dynamism of market competition driving a continual rapid rise in solar capacity through to 2050.

The solar boom’s self-destruction also has troubling implications for social justice. In a decreasingly profitable industry, only those firms with the lowest costs can flourish. China has discovered a unique solution: forced labour. In the Xinjiang region, which produces 45% of the world’s solar-grade silicon, Uyghur and Kazakh people are compelled to work in the solar industry for a pittance (if that), or else face internment in re-education camps. Unable to replicate these conditions, Western solar firms have doubled down on automation: in the US in 2020, solar jobs declined by 7% while the installation of new solar capacity reached record heights. In such conditions, it will be difficult to achieve the aspirations of the Green New Deal or Just Transition, namely a form of decarbonisation that benefits workers. 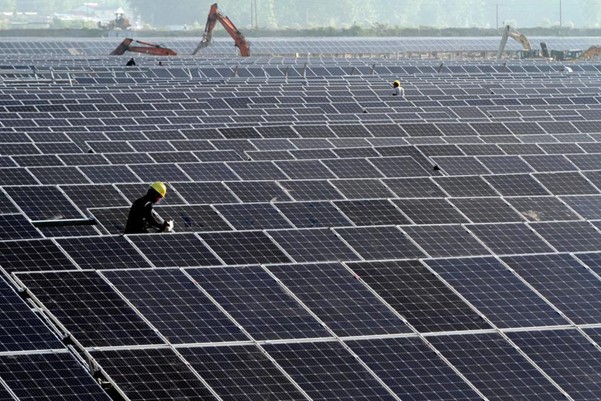 But the challenges facing solar are not natural or inevitable. They are problems of capitalist political economy. To side-step capitalism’s self-defeating growth dynamic, solar power could be commonly held by workers and energy users, rather than private owners. Further, the development and distribution of solar capacity could be matters of democratic planning – planning that would prioritise not profit-making, but sustainability and social justice.

This industry is, indeed, no longer a gold mine. Neither should it be. Protecting life on Earth is reason enough to expand solar infrastructure.

Alexis Moraitis (2021) ‘From the post-industrial prophecy to the de-industrial nightmare: Stagnation, the manufacturing fetish, and the limits to capitalist wealth’, Competition and Change.