The UK’s National Union of Students has been running a campaign since 2015 that encourages its members to challenge what they are being taught. Across the western world the academy is notoriously white, and therefore it has become increasingly unrepresentative of the racially and religiously diverse societies in which it is located. The campaign asks members of teaching staff to devise a curriculum that does not simply reproduce the general absence of people of colour from the academy itself.

This is an important challenge. To respond positively is to disturb the relationship between what students are generally asked to read and the centuries of imperial privilege that often inform those readings. It is to recognise not only the simple truth that all historical events can be accessed from multiple perspectives. It is also to forward the intrinsically political claim that every community is best placed to narrate its history through its own eyes. Embracing such a claim is now often spoken of as an attempt to ‘decolonise the curriculum’. In IPE this means, in the first instance, asking ourselves from where we take our knowledge of the economy.

What are generally considered to be the most authoritative claims about everyday economic life? In what traditions of thought is it necessary to be working for those claims to make sense in their own terms? And, significantly, how do those traditions of thought still reflect today the conditions in which they were first brought to life?

UCL students' ``Why is my Curriculum White``

Almost inevitably this implies a focus upon the textbooks that circulate, especially in relation to the question of how they instantiate certain forms of knowledge and not others. Any claim to knowledge must necessarily have a particular perspective built into it, an intuitive lens through which individual experiences of the world can be grouped together as some meaningful whole. Decolonising the curriculum involves exposing the sources of imperial power that are in danger of remaining unseen when the IPE textbooks present the subject field’s underlying traditions of thought in fundamentally ahistorical terms. Many textbooks imply that their traditions of thought are equally useable by everyone everywhere. Yet looking more closely at who is speaking within the theory and on whose behalf tells us that this cannot be the case.

However, these supposedly neutral concepts emerge from historical and cultural origins that are far more contested and hierarchical. For instance, John Hobson has recently argued that Marxist theories of world politics tend to celebrate and ultimately defend Western civilisation, while David Blaney and Naeem Inayatullah have shown how liberal scholarship has deliberately downplayed the violence of colonial capitalism in its defence of economic progress. Despite such colonial lineages, liberal concepts like ‘the market’ and ‘trade’ are unlikely to have their neutrality questioned. They tend to be seen in benign terms, as conversational facilitators, much in the manner of other forms of basic vocabulary. However, scholars in a tradition of thought known as post-colonialism have long argued that the constitution of such concepts in historical circumstances of Empire is very definitely consequential. To take just one example, between the concept of ‘work’ and the concept of ‘property’ scholars like Robbie Shilliam have sought to highlight how practices of slavery raise all kinds of difficult ethical and political questions about how we come to know markets. From this viewpoint, seemingly benign concepts can mask violent political histories within the global economy. 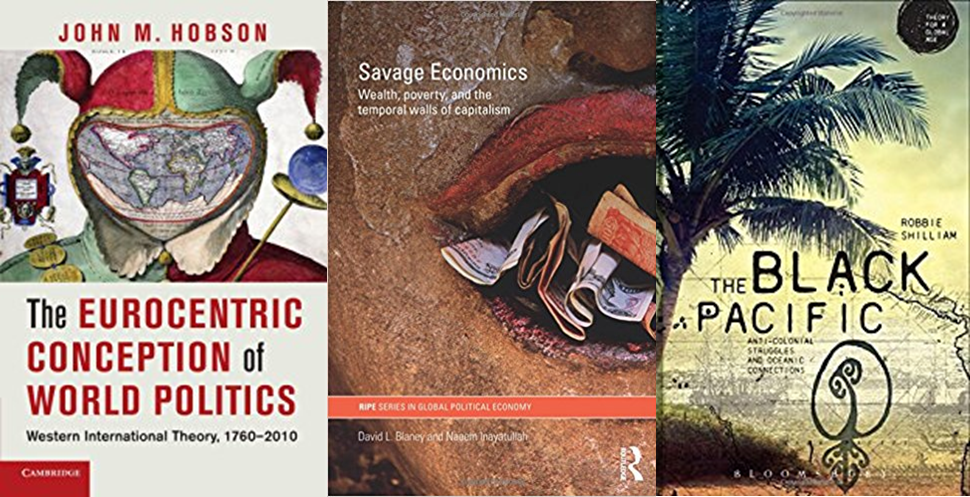 The hidden history of trade

Take the case of trade. In the aftermath of the ‘Brexit’ referendum vote that led the UK to leave the European Union there were major disagreements about who Britain should target as its main trading partners. So-called ‘soft’ Brexiteers like Anna Soubry wanted to retain the closest possible links with the European Union, whilst so-called ‘hard’ Brexiteers like David Davis sought to sign trade agreements with whoever in the world would give the UK a favourable deal. Yet all were agreed that the more trade the better: trade is unequivocally a good thing.

“We must see Brexit as a great opportunity to refocus our economy on global, rather the regional, trade” David Davis MP

‘Trade’ as a generic entity is thereby often conflated with normative arguments about ‘free trade’, which in turn are usually associated with another economic concept that it typically appears alongside in IPE textbooks. This is David Ricardo’s 200-year-old notion of ‘comparative advantage’, which is normally presented as both an explanation of and a justification for free trade. But how much do the IPE textbooks really tell us about the underlying idea? Subjecting it to the decolonising questions outlined earlier reveals some significant silences.

The concept of comparative advantage was originally illustrated by Ricardo using a simple example. Ricardo imagined a hypothetical trading relationship between England and Portugal who  were trading wine and cloth. In the example, Portugal has an absolute advantage in producing both commodities – it takes less hours for them to produce both wine and cloth than England. Ricardo argued that while it may seem intuitive for Portugal to produce both, they should in fact make whichever was the most productive, and so should England. So, for example, if Portugal was able to produce wine more efficiently than cloth, and England was able to make cloth more efficiently than wine, each country should concentrate on their comparative advantage and trade for the other. Therefore if Portugal produced wine, and traded for English cloth under free trade, both countries would benefit and absolute wealth would increase.

Under a system of perfectly free commerce, each country naturally devotes its capital and labour to such employments as are most beneficial to eachDavid Ricardo, ‘On Foreign Trade’ in The Principles of Political Economy and Taxation (1821)

Almost without exception the IPE textbooks say that Ricardo’s basic arithmetic captures a situation in which England and Portugal, the two countries to which the numbers refer, have most to gain by specialising their production and then freely trading their surplus stocks with one another. What has given the concept of comparative advantage such potency is that the same conclusion appears to follow when selecting any two countries, any two goods and any combination of relative labour productivities. Ricardo’s example of English cloth being freely traded for Portuguese wine thus appears to open out into a universal argument in favour of free trade. Everyone would always seem to benefit from this one simple policy move. See for example, how this video explains comparative advantage.

In its abstract form, Ricardo’s concept of comparative advantage erases the actual historical conditions under which English cloth was being traded for Portuguese wine at the time. A treaty had been in place since 1703 to regulate the terms of that trade. Yet far from providing equal access to the supposedly mutual benefits of free trade, the English had exploited Portuguese requests for military protection to keep all of the benefits from the treaty for themselves. Portugal struggled throughout the eighteenth century to pay off the deficit on its wine/cloth trade with England. It balanced the books by agreeing to a massive diversion to London of the gold being newly mined in its Brazilian colony. This in turn entailed a transfer of existing slave labour from its sugar plantations to its gold mines and an influx of new slave labour through the mass transportation of displaced African people. The trade between English cloth and Portuguese wine therefore represented only the third leg of the merchant ships’ overall three-legged passage. The second was to bring South American gold to Europe so that it could act as the makeweight in the trade between Portuguese wine and English cloth. The first was to traffic people between Portugal’s African and South American colonies to work the gold mines.

A slave ship headed to Brazil by Johann Moritz Rugendas, an eyewitness to the scene

Asking what it might mean to decolonise Ricardo’s concept of comparative advantage thereby reveals a disturbing history that would otherwise remain hidden in his abstract numerical example. Even today, European politicians frequently voice pride in their predecessors’ embrace of the free trade tradition: it is as if this was a gift given to the whole world. However, the ‘freedoms’ being espoused were constructed within the framework of a colonial economy as part of the European struggle for empire. They therefore also equate to a history of imposing ‘unfreedoms’ on other people, restrictions whose legacies remain an ongoing phenomenon today.

Important new initiatives speak to this idea of politicising the curriculum. For example, there have been demands by students in South African and British universities that Rhodes Must Fall, a reference to the statues on campuses celebrating the life of British colonialist Cecil Rhodes. Such campaigns are important because they actively educate students about the links between modern universities and histories of colonial domination. Indeed, this speaks to wider practices of questioning the economic curriculum across the world. For example, the media resistance group Adbusters has constructed an alternative textbook called Meme Wars: The Creative Destruction of Neo-Classical Economics that contributes to another vision of knowledge that foregrounds the politics of economic concepts.